Just a few days ago, we were in Los Angeles again filming with the family we’ve been documenting on and off for almost a year and a half. And after 3 long days of chasing them around, and filming their final interviews, we can safely say:

It’s been an incredible journey both for them and for us. When we first met them, they were just pulling the girls out of school and really had no idea what they were going to do next. Along the way, they’ve tried many different approaches, had some ups and downs, and have learned what it means to be homeschoolers.

We leave them in a place where they’ve found what works for their family (at least for now) and with the confidence they need to move forward in their journey into independent learning.

We’d like to take this opportunity to extend a heartfelt thank you to them, for trusting us and allowing us into their lives to document what was a challenging transition. It’s one thing to jump ship from years of public schooling with 2 pre-teen girls, but quite another to allow a camera crew to follow you around and document it. We’re confident their experiences will serve as inspiration to other families who are considering similar choices. 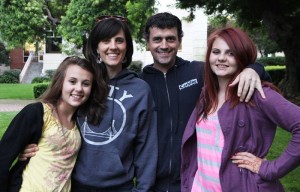 Where do we go from here?

Finishing our filming in Los Angeles was a huge accomplishment, and aside from some smaller pickup shoots, we’re basically done with production. But all that work has also depleted our funds. As we’ve mentioned in previous posts, what lies ahead is editing, editing, editing and all the final elements that go into finishing a film. So as much as we hate to ask, you can still donate to help us reach the finish line. Neither myself or my co-producer Dustin have received any payment, so every dollar ends up on screen and that’s exactly the way we want it. Please do what you can. You can use this paypal button:

or if you want to make your donation tax-deductible, we are still being sponsored by the San Francisco Film Society and you can use this link instead.

Thank you so much for your support.