Many of you have been asking us what’s next and what plans we have for the coming year for Class Dismissed, so here’s a quick look at what to expect for 2015.

Over the past several months we’ve been submitting Class Dismissed to film festivals all over the country and in other parts of the world (including Germany where homeschooling is illegal) and in early 2015 we’ll find out the results of those submissions. Getting acceptance at a film festival would expose the film to a very different audience and get us high level recognition, possibly even some distribution offers. Fingers crossed!

It’s been really challenging to distribute the film on our own, but despite the difficulties, we’ve had a lot of success, completely selling out 9 of the 12 screenings we’ve done so far. This is a better track record than many films (including those with distribution), so in 2015 we’ll continue to do what we can to get the film seen in as many places as possible. In fact, thanks to individuals and organizations that have purchased our DVD screener pack and taken it upon themselves to host their own smaller screenings, we’re thrilled to announce that we have no less than 21 screenings of Class Dismissed lined up in January alone! 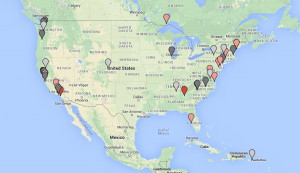 Click on the map image to the right to see a live interactive map of where Class Dismissed has played and is playing next.

If you hosted a screening, or will have one that isn’t listed, contact us with the info and we’ll add it.

If you don’t see your city, here are three things you can do to ensure your community gets to see it:

We’re still not sure when the regular DVD or streaming versions of Class Dismissed will become available. We expect it to be later in 2015, but don’t have an exact date yet. It mostly depends on how much interest there is in continuing the theater & community screenings. We’re really excited to make the DVD widely available, but there’s something special about seeing the movie with a crowd of homeschoolers, homeschool curious, and homeschool skeptics.

If you really can’t wait, technically you could get the DVD now via the screener pack, which includes the DVD (plus guides and other resources for hosting a screening). Perhaps you could talk your homeschool group or friends into helping you obtain it.

As you can see, 2015 is already shaping up to be a major year for Class Dismissed. Thanks for all your support and we hope to meet many of you soon at a screening near you!